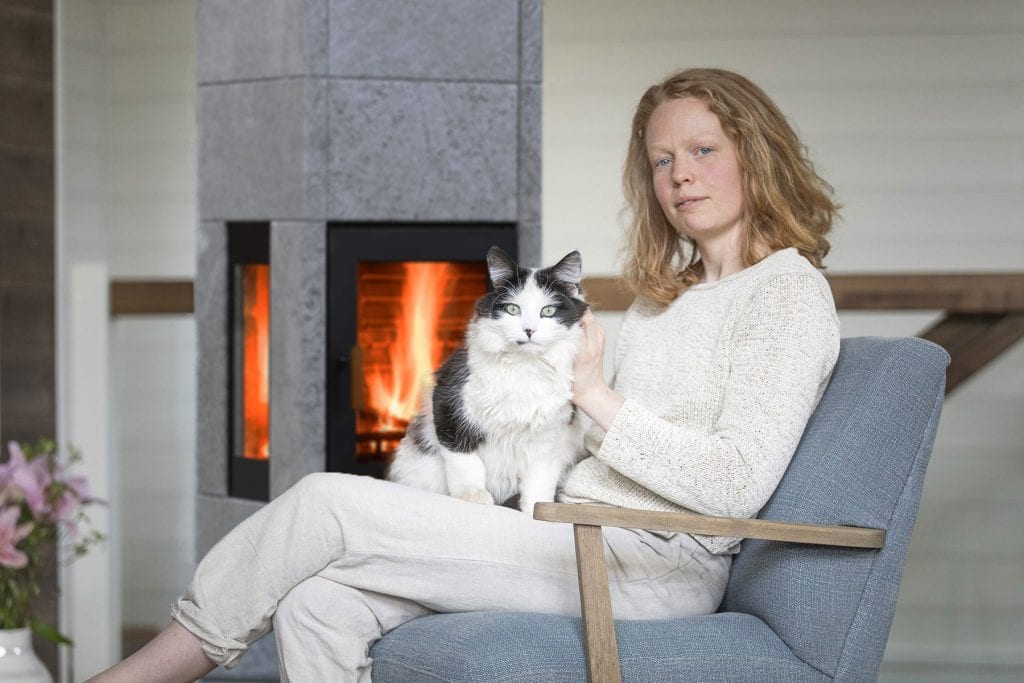 There is an important concept one needs to understand and embrace when living in Norway: being “koselig”.

Our wood burning stoves are individual and unique.
Each stone has a different structure and pattern, and no two stoves are the same.

Our soapstone is grey with a light structure. Our soapstone stoves are a warming piece of art that will last for generations. Norsk Kleber is the only Norwegian producer of soapstone woodstoves and fireplaces. Soapstone is a metamorphic type of rock. This means that it was formed by other types of rock under pressure and high temperatures 500 million years ago. The soapstone is a soft rock, easy to mold and pleasant to touch. It can withstand heats up to 2800°F, and is frost proof and resistant to chemicals. The soapstone from Norsk Kleber has a high talcum content. It is porous and heavy, and therefore has exceptionally good heat storage properties and is nature’s own ‘wonder material’, making for superb masonry heaters.

In Norway, soapstone has been used in cookware and everyday objects ever since the formation of an Early Iron Age settlement in the region of North Gudbrandsdalen. In the Stone Age, the special stone was used for clubs, picks and axes. During the Bronze Age, it was also used for spinning wheels, loom weights, fishing net weights and molds. Findings from soapstone fragments also suggest that the Vikings used soapstone for pots and other utensils. There is also evidence to suggest that the Vikings used soapstone to heat their homes, in woodstove alike structures. The extraction of soapstone directly from the rock face to make pots made an important contribution to many people’s livelihood. As with all types of stone, the quality of soapstone varies from place to place. Our soapstone has a relatively high magnetite content and is therefore particularly suitable for use in wood burning stoves and fireplaces. Heat absorption, storage and emission are optimal with our soapstone: the perfect material for a true masonry heater.

In the 13th century, soapstone was used as décor, and several castles, churches and cathedrals have soapstone adornments. The most well-known of these is Nidaros Cathedral, which is decorated entirely with soapstone. At the end of the 17th century, the production of soapstone wood burning stoves and hearths started at Gudbrandsdalen. Towards the end of the 19th century, several companies were established at Otta to produce soapstone woodstoves and fireplaces. AS Østlandske Stenexport bought up large parts of the soapstone business at Otta in the period 1915–1918, making it the dominant producer. In 2014, the name of the company was changed from Granit Kleber AS to Norsk Kleber AS, since the company was no longer involved in granite production. The name may have changed, but the business philosophy remained the same, which was to develop and produce high-quality soapstone wood burning stoves. Today, the production process is very modern, with computer-controlled machines, while the products themselves are still based on the same principles as old soapstone stoves, even though this makes our solutions somewhat more expensive than similar woodstoves. The reason for this is simple: we will not compromise on the quality of the products and their excellent heat storage properties.

There is an important concept one needs to understand and embrace when living in Norway: being “koselig”. Most English speakers translate it to “cozy” but that term doesn’t even begin to cover everything that “koselig” can express.

Koselig is warmth and comfort. It’s being in the presence of loved ones in the evening. It’s laughing at home with your closest friends. It’s warming your feet by a soapstone woodstove while wearing knitted socks. It’s a feeling. It’s an action. It’s the atmosphere. Koselig is a lot of things. It’s cuddling with your significant other while sipping hot chocolate – or cuddling on the couch with chocolate ice cream, watching Netflix, whatever your thing is. It’s something as simple as the glow of a fire from a genuine masonry heater, efficiently burning wood.

At Norsk Kleber we have been creating koselig for over 125 years with our elegant, simple, genuine wood burning soapstone stoves.

All our Stove models are also available in Sandstone, Marbles and Exotic Natural Stone from all around the world.